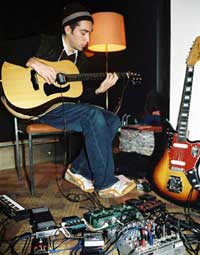 João Orecchia finds roots in sounds, melodies and loops. The heart of his music stems from guitar and prepared guitar, accompanied by other instruments such as toy keyboard, melodica and electronics, plus a range of effects and self made samples. Touching on the experimental, the poptastic, the soundscape, and the beat, the result has a beautiful and sometimes epic quality.

Ranging from soundscape to song and often merging the two, melodies and sounds form thick rich layers of odd rhythms and meditative scenes. Soft vocals occasionally accompany the largely instrumental songs, “beckoning his listeners” into what feels like a very private space.

Perched on a mountain of effects, loop pedals, cables and instruments, João gives the impression of piloting a private space ship on an exploration of sound, inviting his audience on a subtle journey of emotion and sound.